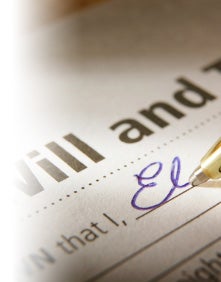 A recent case (September 2017) before the Supreme Court of Georgia focused on the issue of whether a will remained valid or was deemed invalid because it did not contemplate the possibility of subsequent children and the person who made the will had children after he executed the will.

Here's an overview of the story: In 1989, Mr. Hobbs executed a will as a 20 year old while in the military. He died in 2007. His will named his mother as his beneficiary, and his “grandmother” as a successor beneficiary in case his mother died before him. His mother died before him, and Mr. Hobbs later died in 2007. According to the court, “[Mr. Hobbs] fathered three children out of wedlock, each of whom he legitimated and supported, the oldest of which was born twelve years after he executed the will.” His “grandmother” who was not actually his biological grandmother but had raised him since he was very young, filed a petition in 2008 to probate the will. The Probate Court appointed the county administrator as administrator for the will, finding the validity of the will to be in question.

The probate court entered an order in May 2016 in which it found the will made no provision in contemplation of future children. The Court ruled that because of the birth of the children years after the date the will was executed, the will was revoked, Mr. Hobbs was deemed to have died intestate (meaning without a valid will), and the three children were determined to be his legal heirs. The central issue in this case is a Georgia law that essentially provides that if a child or children are born after a will is executed, and the will does not contemplate the birth of a child or children after the date of the will, then the will is revoked, or at least portions are revoked, such that the child or children would receive the share of the estate to which they would be entitled if the testator (the person making the will) had died without a will.

Appeals followed, and the grandmother argued, among other things, that a provision in the will relating to certain possible military veteran's benefits was language that contemplated the possibility of the birth of children after the will was made by Mr. Hobbs. The Supreme Court of Georgia disagreed, affirming the probate court in a unanimous ruling.

Note that in this case Mr. Hobbs died in 2007. This Supreme Court decision came down in September 2017. The administration of the estate was delayed by ten years or so due to this issue, and that legal fight that ensued.

The lesson here for parents is to make sure that you periodically review your will, especially if you later have another child or children. Your children don't all have to be listed by name in your will, but if you want your will to remain valid, it has to include language that the will was made in contemplation of future-born or adopted children. It's a good idea to sit down with an experienced estate planning attorney after a marriage, divorce, or birth or adoption of a child to review your planning documents and make sure that your wishes are going to be followed, and that, to the extent possible, your planning documents are well written so as to avoid a ten-year long legal battle over your estate after your death.